3rd Minute – England gets first corner kick at third minute which was kicked by Tripper but England were unable to score goal from this opportunity.

on the same corner Iran player number 11 holds England player but referee did not noticed and no foul was considered.

7th Minute – Iran player did a foul and England got a free kick but missed the opportunity.

Game paused from eighth minute and resumed on 16th minute due to Goalkeeper injury.

18th Minute – Iran Goalkeeper was unable to play and got replaced on the same time. Alireza Beiranvand goalkeeper was replaced by Hossein Hosseini.

25th Minute – Till this time in the match England have 73% ball possession while Iran have only 17%.

27th Minute – Saka tried to goal on 27th minute but missed the opportunity.

29th Minute – England again got the chance to goal but again they missed it.

43rd Minute – England got corner and Burkaro Saka used the golden opportunity to Score a goal and succeed. England 2-0 ahead of Iran.

45+13th Minute – Iran made a foul and England received a free kick. England players started passing the time in Extra minutes waiting for second half of the game.

90 Minute – Penalty for Iran after VAR review and Mehdi Taremi scores another goal. 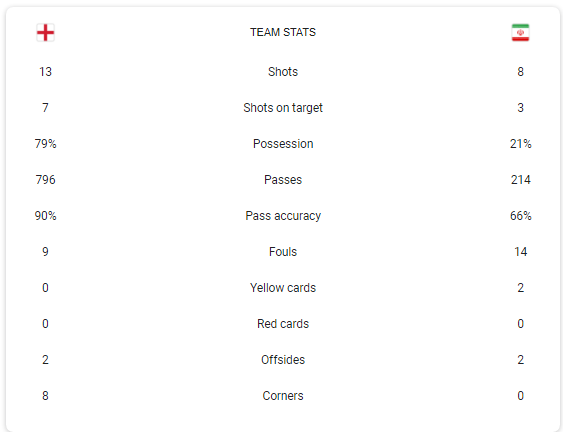 Points Table Group B After Match 2

Man Of The Match

Bukayo Saka England Player is Man of The Match for scoring 2 Goals on 43′ and 62′ minutes of the game.

When Alireza Beiranvand(Iran Goalkeeper) got injured early, pressure buildup on iranian side automatically. Also the substitute Goalkeeper Hossein Hosseini has not performed well as expected.

No doubt England team is outstanding but today they have performed extraordinary and not made a single mistake. England keep 79% Ball possession that clearly shows england keep their dominance on the game from beginning.

Iran performed well but that was not enough if you are facing a giant like England. Also their ball possession is incredibly low due to which they have not got many chances to score goal.

England was simply awesome as usual. Iran should perform beyond their limit.