Netherlands and Senegal started their match on 19:00 Local time Qatar.

Senegal and Netherlands both teams were playing very well from the start of the match, it was nearly impossible to say which team have dominance on the game till first half.

Memphis Depay replaced Vincent Janssen on 62′ in the game Netherlands.

Cody Gapko scored a goal and leads Netherlands 1-0 in the game.

Nampalys Mendi Senegal player received a yellow card because he caught the heel of Klaassen.

Davy Klaassen Scores second GOAL for Netherlands on 90+9′ of the game.

Netherlands won the match by 2 goals. 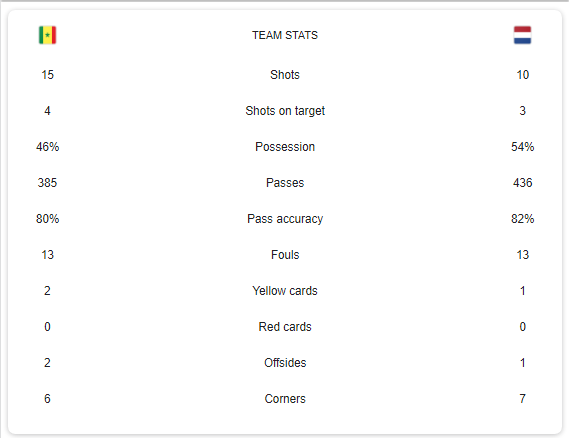 Points Table Group A after Senegal vs Netherlands Match 3

Man of the Match

Cody Gakpo is man of the match in Senegal vs Netherlands Match 3 FIFA world cup 2022 for scoring a goal at 84′.

Cody Gakpo’s 84th-minute goal hit Senegal badly from which they didn’t get a chance to recover. Also, injuries of the players affected the gameplay of Senegal.

Netherlands played in defensive mode as Senegal was looking in attacking mode. Netherlands have not attempted many goals but played the sensible game and kept eye on a single opportunity. Kept hope till the last few minutes and succeed to score two goals.

Senegal played fabulous overall but their goal attempts were not as good as they should be. Even if they have attempted many goals, not a single out of them we can say was perfect.

Both teams played amazingly but as I said Senegal failed in goal perfection where Netherlands did not.