Fifa world cup 2022 is going to start on 20th of November 2022 with just a slightly change in Schedule, it was to be started on 21st of November previously. A total of 32 teams qualified for world cup and FIFA have drawn the 32 teams in 8 different groups from A to H. Every group contains 4 teams each, from which 2 teams will move to Round of 16, from this knockout round 8 teams will move to quarter-finals and form these 8 teams 4 will qualify for semi-finals and 2 will conquer for final trophy . This is just a Group-by-group analysis and predictions prior the world cup in accordance to International Ranking and team analysis.

Group A is a host group means this is a group where Qatar that is a host country is going to play. 2010 world cup which was hosted by South Africa is the only world cup in which host country did not move to second round. Host country have the opportunity and confidence to fight and Win. Qatar have won Asia Cup in 2019 under the coaching of Felix Sanchez. 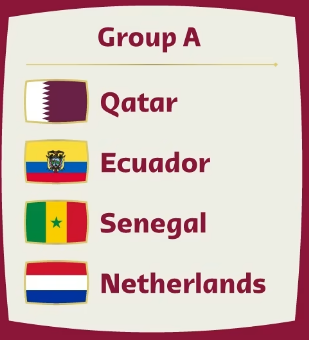 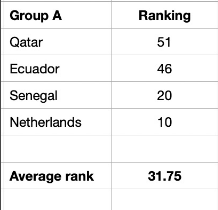 Netherlands with rank 10 is sure to be qualifying in Round of 16 at first place if we compared it with other teams according to Ranking. They had a wonderful performance in 2014 world cup where they beat Brazil by 3-0 to acquire third place in tournament. They did not qualify for 2018 world cup still considered to be strongest team in Group A.

Ecuador team is also a good choice of next round but on paper they don’t seems to qualify for that. It will be difficult choice between Asian Champion Qatar and Senegal but despite not being best in last few matches and tournament I think Senegal might beat Qatar for Round of 16 Qualification.

My pick in Group A

Group B consist of England, Iran, USA and Wales. England seems to be the strongest in this group with FIFA ranking 5.

England team is great for and had a good performance in past few tournaments. Harry Kane of England is in great attacking Mode, while they have a strong defence with Kyle Walker who plays for Manchester City. England may perform extra-ordinary than we think in this tournament. 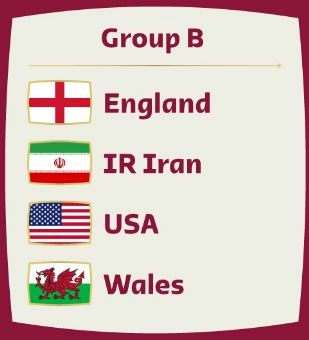 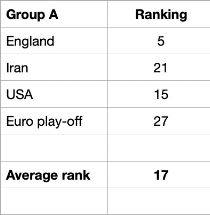 USA and Wales struggled a lot to enter world cup in qualifiers. Though USA have a great 21st rank world wide but it won’t survive against England, same situation is for Wales but I think with a good defence Iran will draw a match against England which will lead Iran into next round.

My Pick in Group B

Group C is group of Argentina with a shining star Messi. No doubt they will be on the top of list in this group by winning all three matches against Mexico, Poland and Saudi Arabia. Argentine 2022 team is a team which is not only dependent on Messi but they have other legend players too. They are undefeated in last 35 matches they can set a international record if they reached Round of 16 undefeated. 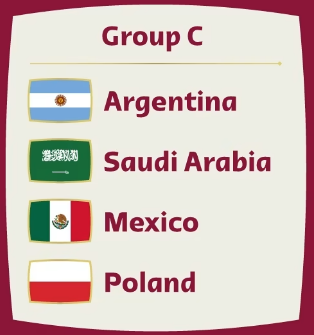 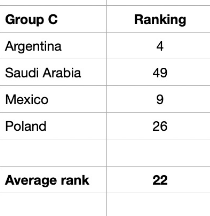 Saudi Arabia is a rising Asian team but Asia is a kid when compared to Europe in football. Saudi will get chance on last position in Group C while deciding 1 between Mexico and Poland is too difficult. Mexico ranks 9 in the list and Poland team is great form. Some experts think Poland will move next but we will go with Mexico on second position in Group C.

My Pick in Group C

2018 Champion France land in group D, they are not as strong as they were in 2018 but still they have the capability to top group D. France may white wash all 3 teams in their group. 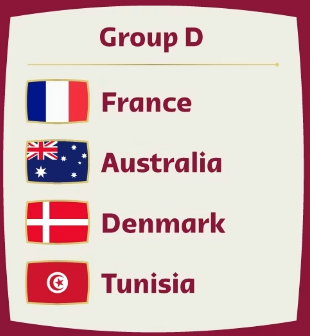 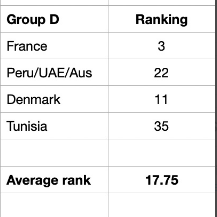 Australia struggled a lot to enter fifa in qualifiers, Denmark is a strong team but Tunisia has a strong defence. I think Tunisia an African challenger team will move to next step from Group D, but probability of Denmark is maximum to qualify for next round.

My Pick in Group D

Group E is ‘Group of Death’ in World Cup 2022 with Legend teams like Germany, Japan, Spain, Costa Rica. This is the most toughest and unpredictable group in 2022 world cup. 2010 Champions Spain seems to Top group E with current Rank 7. Though their performance after 2010 world cup is not amazing but they have emerging young players like Pedri, Gavi and Ansu Fati. 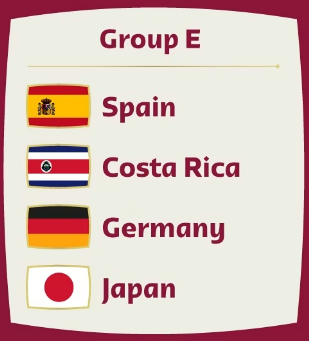 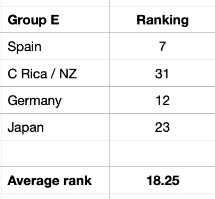 4 Times winner Germany featuring Young Talents like Thomas Muller seems to take second spot in the tournament according to Ranking factor. Japan though a good team but has landed in a wrong group which is group of death same thing is for Costa Rica. Costa Rica did not qualify for round of 16 in last world cup 2018. This time also it seems bad luck for Costa Rica.

My Pick in Group E

Group F contains Croatia, Morocco, Belgium, and Canada. Croatia had a best performance in last Fifa world cup. They beat Russia in Quarter finals then in semi-finals they beat England by 2-1 and reached finals. Although France won the final but world loved Croatia’s game in over all tournament as well as in Final Match. They have a strong team and confidence in this world cup. See what Luka Modric will do for his nation in this series. 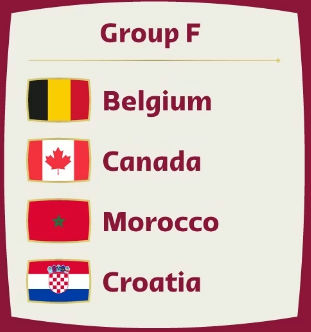 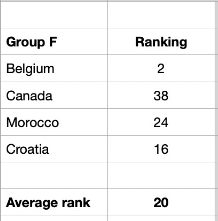 Belgium currently rank 2 might be at second position in group matches after Croatia. Belgium is strongest under the coach Roberto Martinez’s and may perform extra-ordinary than we think in this tournament.

Canada and Morocca might struggle a win a single match in this tournament.

My Pick in Group F

5 times title winner Brazil featuring legends like Neymar, Roberto Firmino and Gabriel Jesus is one of the favourite team to win world cup world wide. They have a strong team and with no doubt they will lead the group and beat all the teams in group matches. Other teams are Serbia, Cameroon, Switzerland. 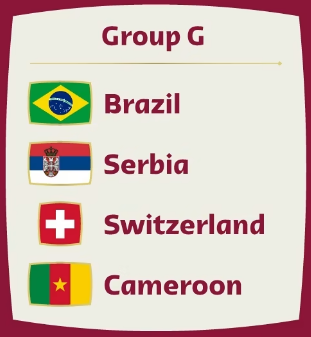 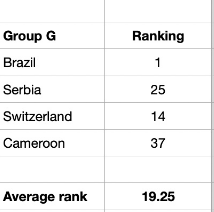 Deciding which team will be at second position between Serbia, Cameroon and Switzerland is difficult their are 25, 37 and 14 respectively. Though Cameroon is the lowest in group but but their unpredictable game may take them to qualifiers 16.

My Pick in Group G

Group H is also a tough group with teams like Portugal, Ghana, South Korea and Uruguay. Cristiano Ronaldo’s Portugal have never won world cup in History. We need to see what this legend can do for his nation and for the fans who wants to remember him with a trophy. But in group H portugal might be at second place after Uruguay in list. 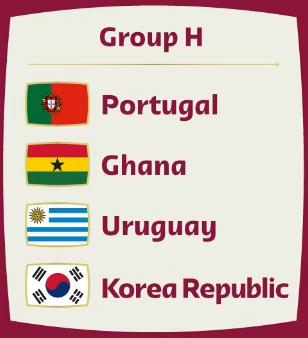 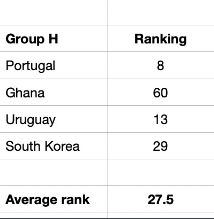 Uruguay is the first world cup champion and will qualify in the group matches on first position. Ghana and South Korea will b suffer a lot to qualify but on paper they don’t seem to beat Portugal and Uruguay and will be out for next round.

My Pick in Group H

This will be knockout round played between top 2 players from the above 8 groups. The qualifiers from this round will move to quarter finals. We have predicted all the teams from group play. Winners of group A will play with winners of Group B and so.

Match 2 from group A and B England vs Senegal in which England seems to be strong and might qualify for the next round.

Match 3 from group C and D will be between France and Mexico where France might beat Mexico to qualify further.

Match 4 from group C and D Argentina vs Tunisia where Argentina will punish Tunisia or Denmark whoever qualify and will reach quarter final.

Match 5 from group E and F Spain vs Belgium where Spain has a strong position.

Match 6 from group E and F Germany and Croatia where Germany will move forward.

Match 8 from Group G and H Uruguay and Cameroon where Uruguay will move forward.

Semi Final 2 Germany vs England where England will beat Germany

England might be the first time winner of FIFA world cup.